N3 Toll Concession (N3TC), the company managing the N3 Toll Route between Heidelberg in Gauteng and Cedara in KwaZulu-Natal, advises that traffic volumes are expected to increase from midday on Friday, 19 March in a southbound direction towards KwaZulu-Natal. High traffic volumes may be experienced into early evening on Friday when it will start to taper off. With Monday, 22 March being a public holiday, traffic volumes are expected to pick up from 09h00 in a northbound direction, towards Gauteng, with higher volumes continuing through most of the day.

The N3 Toll Route is currently being rehabilitated and upgraded in various sections along the entire corridor. Construction activities will remain in place this long weekend in preparation for the upcoming Easter weekend.

Road users are warned that on-going construction may cause congestion and delays, especially at peak times, and are advised to carefully plan ahead.

“We appeal to road users for their patience and understanding. Construction upgrades and rehabilitation work are essential to keep a strategic transport corridor such as the N3 Toll Route in good condition and are of significant benefit to the South African economy in the longer term,” explains Thania Dhoogra, N3TC’s operations manager.

“Please adhere to the reduced speed limits in the construction zones and carefully follow the various signposts along the route. The good news is that road users can expect both northbound lanes to be open to traffic returning on Monday next week.”

According to the SA Weather Service, weather along the N3 will mostly be clear with mild temperatures. Isolated scattered showers may be experienced along parts of the Route with early morning fog patches, especially along the high-lying areas such as Van Reenen’s Pass.

If possible, it is advisable to travel outside of the peak travel times (indicated in red on the grid below) when traffic volumes may increase to well over 2000 vehicles per hour, placing an additional burden on travellers and traffic management resources. 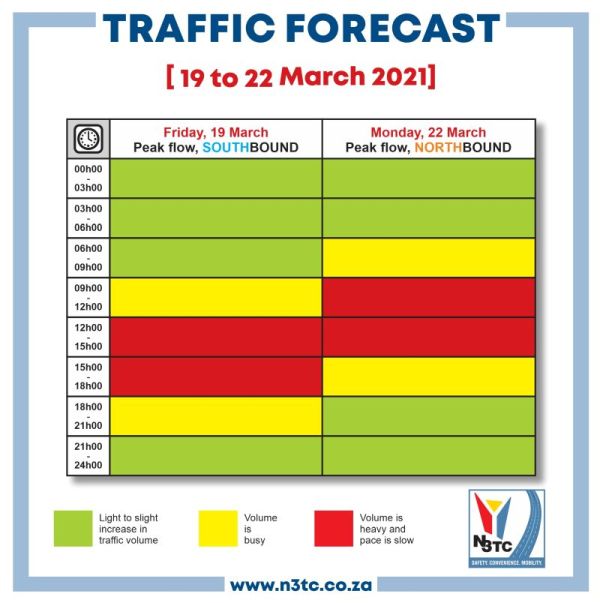 “Please take every precaution to stay safe on the road and always adhere to speed limits and maintain following distances. Human error and reckless driving remain some of the main causes of crash incidents along the N3 Toll Route. The majority of crashes are caused by drivers losing control of their vehicles and rolling, head-tail collisions and/or vehicles leaving the road. Speed, aggressive driver behaviour and unroadworthy vehicles, causing tyre bursts or brake failures, often play a part in these crashes,” ends Dhoogra.

This website uses cookies to improve your experience while you navigate through the website. Out of these, the cookies that are categorized as necessary are stored on your browser as they are essential for the working of basic functionalities of the website. We also use third-party cookies that help us analyze and understand how you use this website. These cookies will be stored in your browser only with your consent. You also have the option to opt-out of these cookies. But opting out of some of these cookies may affect your browsing experience.
Necessary Always Enabled

Performance cookies are used to understand and analyze the key performance indexes of the website which helps in delivering a better user experience for the visitors.

Analytical cookies are used to understand how visitors interact with the website. These cookies help provide information on metrics the number of visitors, bounce rate, traffic source, etc.

Advertisement cookies are used to provide visitors with relevant ads and marketing campaigns. These cookies track visitors across websites and collect information to provide customized ads.

Other uncategorized cookies are those that are being analyzed and have not been classified into a category as yet.