With the start of the holiday for inland schools coinciding with the Human Rights Day long weekend, N3 Toll Concession (N3TC) and its traffic management partners are gearing for an increase in southbound traffic (towards KwaZulu-Natal) from midday on Friday, 18 March.

Busy conditions are also expected in a northbound direction (towards Gauteng) on Monday, 21 March, but as a result of the school holiday, return traffic volumes will most likely be lower than on Friday. Inland schools will reopen on Tuesday, 05 April.

Wet weather conditions may place an extra burden on motorists

Leading into and during the long weekend, the South African Weather Service has forecast that severe thunderstorms and scattered showers are likely to occur along most parts of the N3 Toll Route. This may result in difficult driving conditions, traffic congestion and possible delays, and may cause additional stress and frustration for motorists.

N3TC appeals to drivers to be extra cautious and patient under these conditions, and to drive defensively. “Drivers should please switch their headlights on for increased visibility, reduce speed and increase their following distances. Remember, speed limits are set for ideal conditions, not for poor weather and travel conditions,” explains N3TC’s operations manager, Thania Dhoogra.

Road users are requested to please adhere to the reduced speed limits in all these construction areas and to carefully pay attention to the various traffic signs.

Peak travel times are indicated in red on the grid below. Traffic volumes may increase to well over 2000 vehicles per hour at peak times. High volumes may result in slow moving traffic and extended travel times, in turn placing additional burdens on travellers and traffic management resources. Tired drivers lose their concentration and are easily distracted, which often leads to mistakes being made. The majority of crashes on the N3 Toll Route are caused by human error, such as drivers losing control and rolling their vehicles; head-tail collisions and/or vehicles leaving the road. Speed, reckless and negligent driver behaviour and unroadworthy vehicles also contribute to crashes. 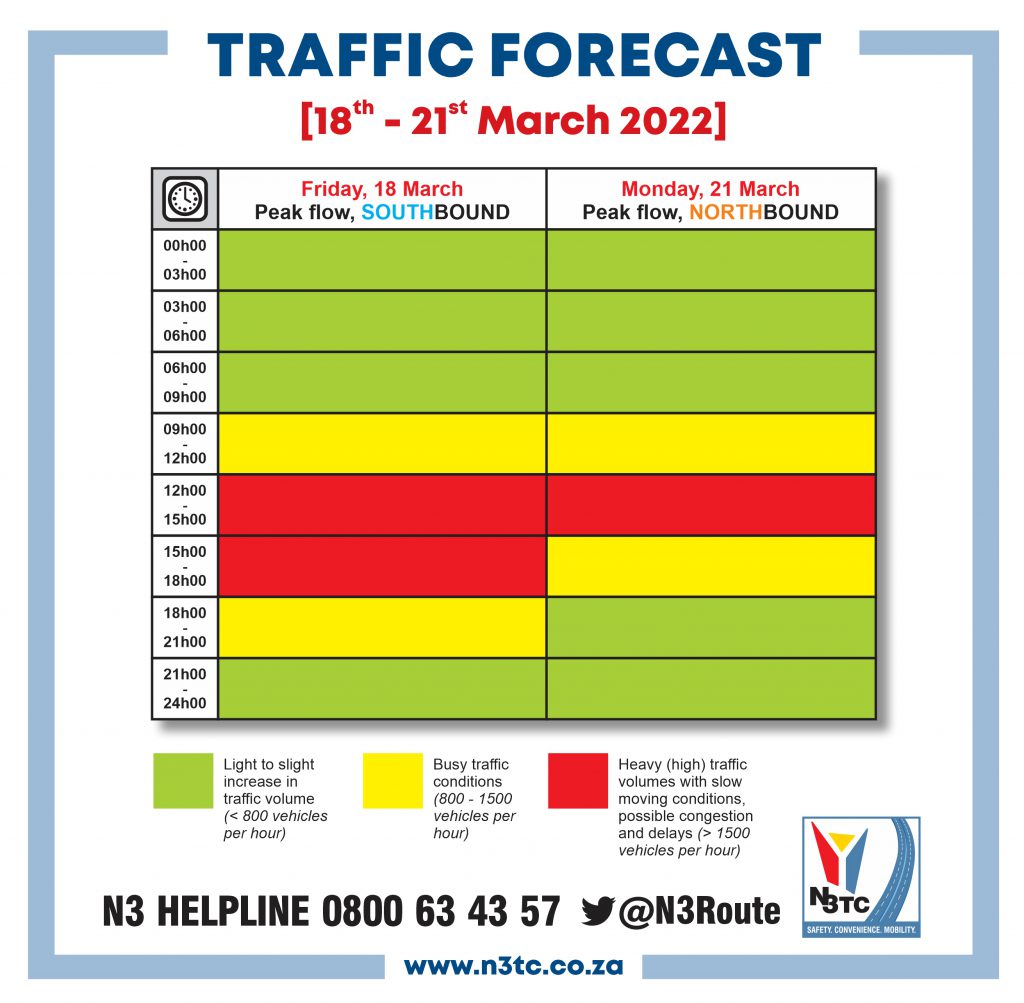 Law enforcement officials, as well as members of the various emergency- and road incident management services have already been deployed along the N3 toll route. They will continue to maintain a highly visible presence along the route for the duration of the long weekend.