Litter is a people problem which can only be solved if everyone works together to decrease the volume of litter in our communities, across our countryside and along our roads.

Starting this weekend, as part of N3TC’s #BinYourLitter campaign, road users will notice new signage displayed along the N3 Toll Route to remind them to play their part in keeping our country clean and our environments safe.

Although it is unlawful, South Africans seem to have a adopted a lackadaisical approach to littering, as can be seen in many of our towns and cities, and along our highways and byways.

You are littering if you throw any items from a moving vehicle; or drop your waste anywhere else but at a designated waste disposal site or in a bin. Leaving waste next to an already overflowing bin, or randomly disposing of it on the road or in any public place are also forms of littering. It is also littering if you drop a load or lose vehicle parts whilst driving and don’t report such dangerous objects to local authorities or emergency services, or arrange to have it removed.

“No matter who you are, or where you are from, we need to remind ourselves that we are the custodians of this planet and guardians of our homes, communities, towns, streets, roads and wildlife. It is high time that we hold each other accountable for protecting our natural habitats, water resources and our communities in the interest of our own health and safety, and the well-being future generations.

With the #BinYourLitter awareness drive, N3TC aims to remind all road users that waste is not only unsightly, it is also often highly toxic and very harmful to humans, animals and our environment. Litter poses a serious threat to our way of life. We can no longer afford to turn a blind eye to this disastrous reality,” explains N3 Toll Concession’s operations manager, Thania Dhoogra.

Each day N3TC’s maintenance teams spend many hours picking up roadside litter. It seems to be a never-ending cycle of back breaking work.

More than 6000 bags of rubbish are bagged every month. This includes anything from soiled baby nappies to cigarette butts, food scraps, empty liquor or cooldrink bottles, cans, plastic, fast food wrappers and more; but it excludes large items such as dropped loads, vehicle parts, pieces of metal and rubber, or other large items that cannot be bagged.

“Clean-up costs along a national road, such as the N3, quickly add up to significant amounts. Money spent on waste collection and removal could have been allocated to infrastructure- and community development, or contributed to economic sustainability and growth, but rather it is literally wasted on the detritus of our consumer culture and laissez faire attitudes.”

Apart from the financial cost, the environmental degradation caused by litter is enormous. It ends up in water systems, impacting aquatic habitats, wildlife and the wider ecosystem. Roadside waste often contains toxic chemicals which leach into the ground and eventually end up in freshwater streams and rivers, and ultimately the oceans. Furthermore, carelessly discarded litter may have disastrous consequences including the spread of pests and diseases, causing wild fires or road crashes, and leading to the loss of lives, habitats, assets and infrastructure.

“Litter ultimately diminishes our ability the use and enjoy our spaces, turning them into unpleasant places. Please help us to stop this tide by avoiding illegal dumping, and only disposing of your litter in the correct manner at appropriate places. For your convenience, clearly marked rubbish bins are placed at key points along the N3 Toll Route where you can safely do so,” ends Ms Dhoogra.

On the N3 Toll Route, road users can report illegal dumping or any dangerous objects on the road to the 24-hour N3 Helpline on 0800 63 43 57 or send a message to @N3Route on Twitter. 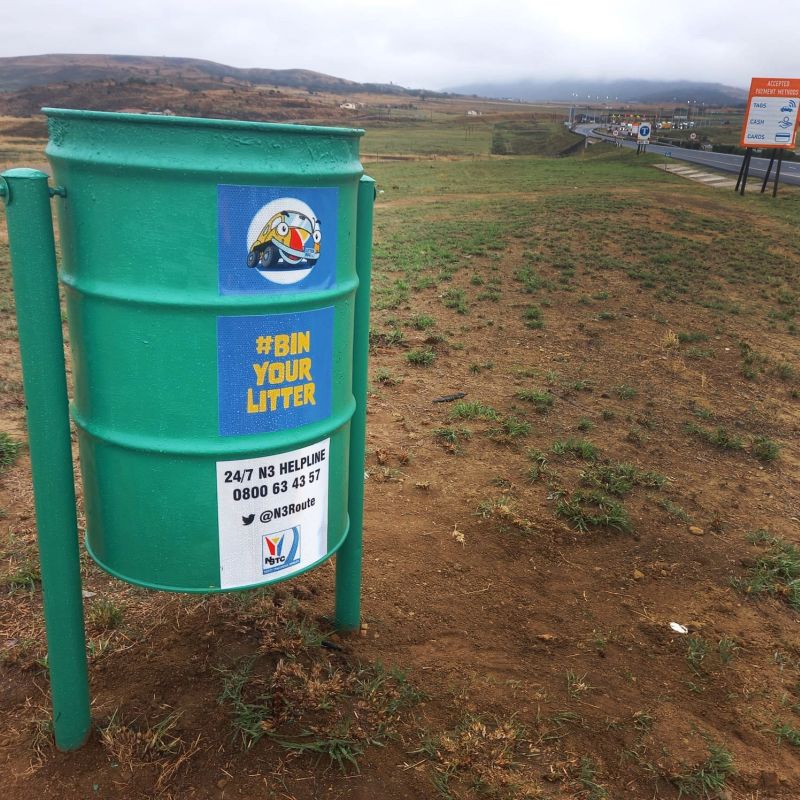 Posted in Litter
We use cookies on our website to give you the most relevant experience by remembering your preferences and repeat visits. By clicking “Accept All”, you consent to the use of ALL the cookies. However, you may visit "Cookie Settings" to provide a controlled consent.
Cookie SettingsAccept All
Manage consent